Knife crime has featured heavily in the news and political debate of late after a rise in fatal stabbings. What are the actual facts of the matter? This briefing addresses the recent evidence and explores the links between geography and race, as well as trying to tackle some of the common explanations put forward. 1

Is the frequency of knife crimes increasing?

More recent figures have put the number of homicides involving a knife or sharp instrument at 285 in the year ending March 2018. This is the highest number recorded since records began in 1946.3 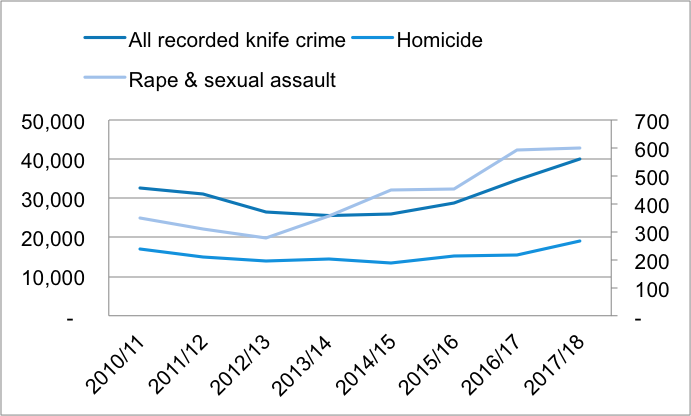 Since the statistics above are referring to crimes recorded by police, it is important to validate them against other sources, in order to rule out the possibility that they are simply down to better reporting or recording. One such alternative is the number of hospitalisations related to knife crime. 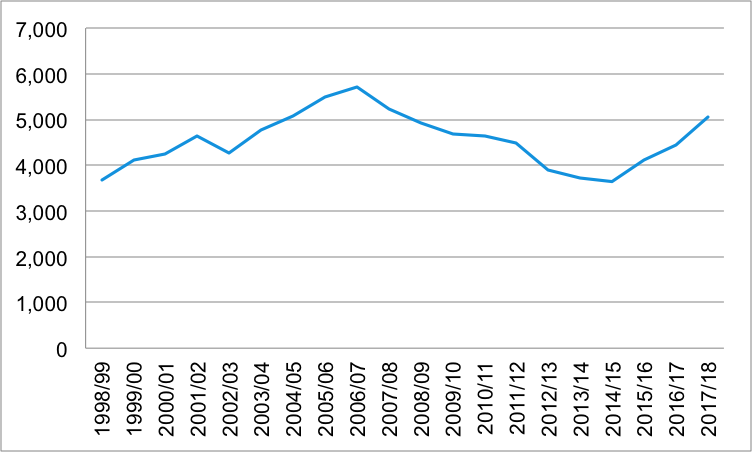 Are the changes the same across the country?

Of those knife-crimes recorded by the police in England and Wales, 37 per cent took place in London. Indeed, when we take population size into account then it is in the capital city that knife crimes are most prevalent. The Metropolitan Police recorded 168 knife-related offences per 100,000 population – more than any other police force in 2017/18. Other forces with high rates are West Yorkshire (107 per 100,000) and West Midlands (98). Last year (2018) there were 132 violent deaths in London. 57 per cent of these were the result of stabbing. This is the most in a calendar year since the 131 in 2009.4

That is not to say that all police force areas have witnessed growth in knife crime at the same rate, or even any growth for that matter over the last four years. Since 2014/15, knife crime offences per 100,000 recorded by the Metropolitan Police have increased by 48 per cent. This compares with 97 per cent for West Yorkshire, 71 per cent for Leicestershire, and 77 for West Midlands. Thames Valley has witnessed a 235 per cent increase although presumably this is to do with a comparatively small population size. Sussex. Surrey, Suffolk, Gwent, and Northumbria police forces have all witnessed declines over this period ranging from 9 to 32 per cent.

Are victims getting younger?

Anecdotal evidence, shared in the media, from hospital and emergency responders suggests that those involved in knife crime are getting younger and younger. The data present a less clear picture. The share of under-16s admitted to hospital with knife injuries has only fluctuated between 2 to 4 per cent since 1998/1999. The share aged between 16 and 18 stands at 13 per cent in 2017/18; up from 10 per cent in 1998/99 but marginally down from 14 per cent in 2007/8 (it is possible that there will be subtle shifts within these categories).

Police figures show the share of cases resulting in a caution or sentence, where the offender was aged 10 to 17 has risen from around 15 per cent in 2013 to 22 per cent in 2018, but this is roughly the same as in the beginning of 2009.

Is more lenient sentencing to blame?

The issue of knife crime was recently debated on the BBC’s Question Time programme (November 8th 2018). It was suggested that the rise of knife crime was down to more lenient sentencing. This is unlikely to be true since the caution rate for knife offences has been declining since 2007 from 37 per cent to 12 per cent in 2018. Meanwhile, the custody rate has risen from 16 per cent to 37 per cent over the same time period.

Average custodial sentences have been increasing from 2.8 months in 2000 to 6.5 in 2017. The rate of increase is roughly constant. Increased sentencing has accompanied a rise in the number of people proceeded against, although that fell between 2009 and 2012, only to rise again thereafter.

Figure 3: Custody and caution rates for knife crime offences in England and Wales 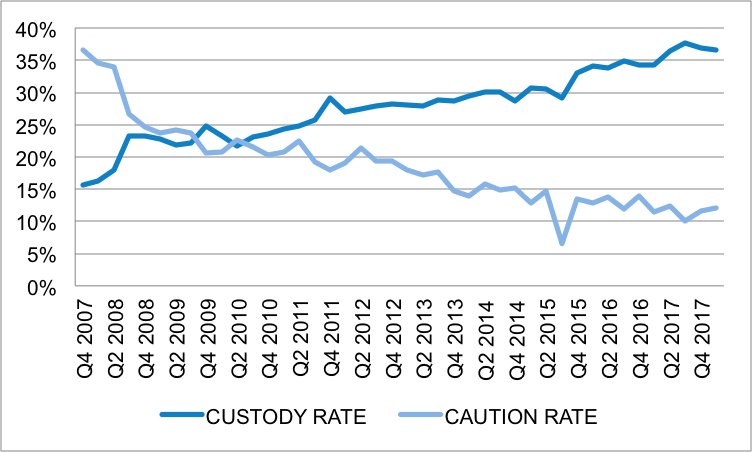 What is the evidence on stop and search?

It is also true that knife crime was high prior to the reducing of stop and search by Theresa May when she was Home Secretary. From this it can be inferred that the reduction did not lead to an increase in knife crime, although it is possible to conceive of lagged-effects whereby the absence of restraint is only realised by criminals at a later date.

Many look to the experience in combatting knife crime in Glasgow as the model with which to tackle the recent rise, whereby it is treated as a “public health issue”. But as Colin Sutton in the Sunday Times of Nov 11th 2018 wrote: “Those holding up Glasgow as a shining example should remember that the city’s long-term strategies were complemented by a six-fold increase in the use of stop and search powers.”

What is the link between knife crime and race?

The Question Time panellists discussed the idea that knife crime had a racial element but sought to play it down. One black member of the audience was blunter saying that it was black people killing other black people. Is there any truth to this?

As the rap musician Professor Green has pointed out, the majority of knife crime will be carried out by white people with white victims.6 This stands to reason as the majority of the population of England and Wales (86 per cent) is white. It is when we look at proportionality that the over-representation of black people becomes apparent. 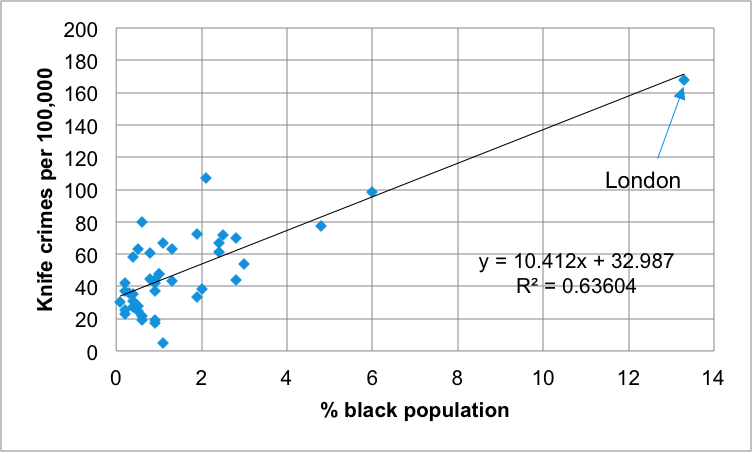 In London in 2017, out of 2,676 people proceeded against for knife crime offences, 1,273 were classed as Afro-Caribbean. That is almost half, but black people make up around 13 per cent of London’s population. 7

Moreover, if we look at all those convicted or cautioned for knife and other offensive weapons offences in England and Wales, then we see in 2017, 21 per cent were black, while 7 per cent were Asian and 71 per cent white. The black share is up from 12 per cent in 2008. Remember that the black population share is 3 per cent.8

According to Home Office statistics, black people are much more likely to be victims of homicide. In 2013/14 to 2015/16 there were 32 homicides where the victim was black per million people compared to 8 white and 11 Asian. There is little difference between London and the rest of England and Wales.

Homicide rates are greatest for black men at 52 per million compared to 12 for all men and 14 for black women. While most victims are over the age of 21, the share of younger victims is greater for black than white or Asian people. This however is only really evidenced among males.

This all fits with the pattern of knife crime familiar to readers of newspapers, of young black men murdered by other young black men, often with little apparent reason.

However, the term ‘black’ encompasses many different ethnic groups. Analysis conducted by Webber Phillips found that of 120 people stabbed to death in London in 2018, those who were black tended to be from ethnic groups that are relative newcomers, at least in terms of population shares. 3 per cent were black Caribbean compared to 16.5 per cent black African. A further 22 per cent were classified at Muslim, including North African Muslims (3.7 per cent) and Somalis (4.6 per cent), many of whom will be classified as black in police statistics. Many of them will be arriving with family traumas.

The extent to which this can be explained by cultural or economic factors is open to debate. Some argue that the disproportionate representation of black people is down to factors like poverty, discrimination, and social exclusion. Others point to things like family breakdown, gang culture, and honour.

Regression analysis of London boroughs data reveals a strong link between the share of black people and the rate of knife crime.9 There is also a positive statistical relationship between the black youth unemployment rate and knife crime as well as the share of black households that are single parent, and knife crime. However, these relationships are largely spurious and can be accounted for by deprivation (see table in Appendix).

However, while it is true that many culprits as well as victims will come from disadvantaged households, it is also true that deprivation is not unique to black people. Perhaps the more pertinent question is to ask why a minority respond to deprivation in such a destructive manner. Moreover, the Webber Phillips analysis may very well point us towards the conclusion that this is increasingly an integration issue with individuals from ethnic or national groups that are more recently arrived getting caught up in knife-related violence. (Note that black unemployment is falling at the same time that knife crime is rising.)10

Knife crime is rising. Explanations relating to deprivation have some role to play but are not the entirety of the story. Indeed, it was found that knife crime increased during economic good times, fell during the recession and has only relatively recently begun to climb again.

It would imply that knife crime is independent of economic circumstances and that if it is more cultural then it should be preventable. The cultural factors that impact on knife crime such as an honour culture and status-seeking among young men, especially in London young black men, who believe other paths to status are blocked, are hard to research and combat but remain the most fruitful lines of inquiry. It would also make sense to focus on vicious cycles whereby knife crime creates fear which leads to more knives being carried – and because there is often little trust in the police or other public authorities in knife crime areas people, especially young men, take the law into their own hands for self-protection.

It is important to remember that those involved in knife crime actively choose to do these things, albeit often under circumstances not entirely of their choosing. They have agency like everyone else and an excess of sociological thinking can lead to the downplaying of personal responsibility. Race does not cause knife crime but knife crime is more likely within some groups than others. While it is important to acknowledge this disproportionality, focussing on it will only accomplish so much. The key to the solution is breaking the cycle and getting across a convincing message to young people that education, employment and more conventional routes to status and recognition offer the better route long-term. It is not as well known as it should be that individuals from Chinese and Indian backgrounds have achieved a greater access to the middle-class professions than the white British majority. This is reflective of their high levels of achievement in education and this must surely be the reason behind their success. This demonstrates the openness within the country, despite what disadvantage and discrimination there might be. This must surely be something that deserves greater prominence in our discourse on ethnicity and fairness and should be the foundation for winning the battle against the scourge of knife crime.

Academics in
the field