Let’s not get drunk together!

When talking about mixing, integrationists will often struggle to name a place where ethnic mixing for adults can occur. It certainly isn’t the pub.

Traditionally, pubs were places where people could meet and mixing would occur with alcohol helping it on its way (for better or for worse). However, Britain is now culturally diverse on an unprecedented level and not everyone shares the same taste for booze.

New statistics from the ONS show how alcohol consumption differs by ethnic group (despite the admittedly crude categories). As the graph below shows, 16 per cent of whites were teetotal compared to 70 per cent of Asians and 51 per cent of blacks. 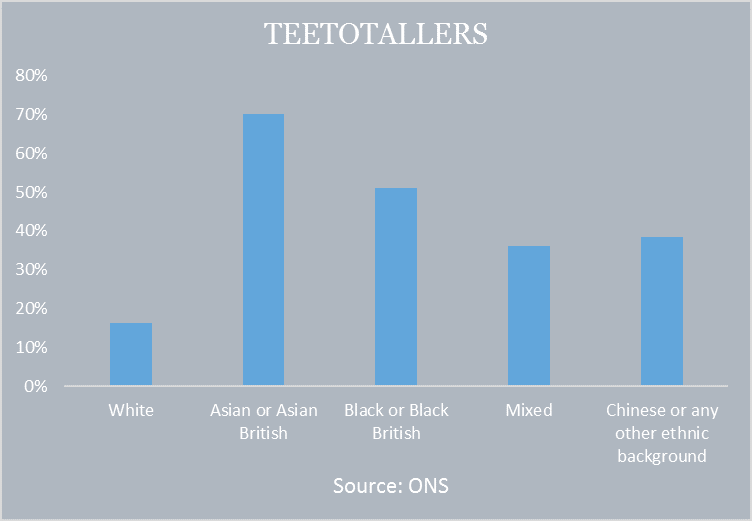 Among drinkers, white people also lead the way in the amount of alcohol drunk.  The ONS figures show that white drinkers who consumed more than 7 units a week (equivalent to 3/1/2 pints) amounted to 30 per cent. For Asian and black drinkers, it was 13 and 24 per cent respectively. These figures do not account for different age profiles between ethnic groups – ethnic minority groups tend to be younger and younger people have been found to be drinking less in recent times. However, there will still be strong differences that will be accounted for by the role of culture and specifically religion. Both Sikhism and Islam forbid drinking. 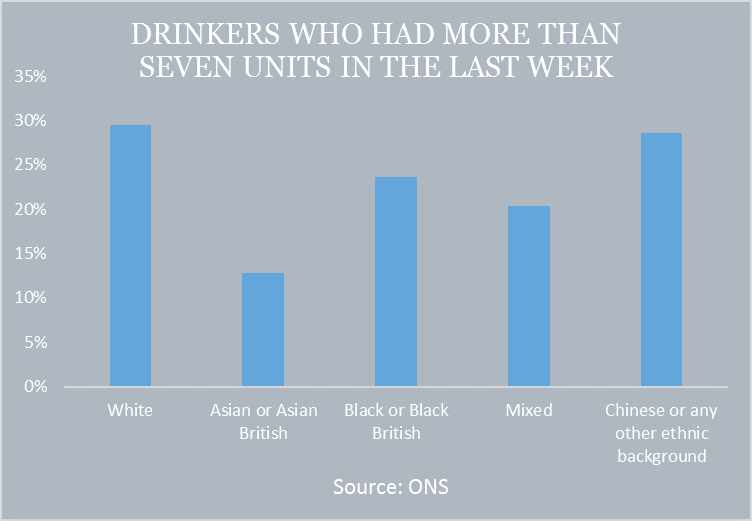 Another thing to consider is that how we drink differs across ethnic groups. Ben Judah notes in his book This is London how Eastern European workers often drink in the streets while a glance around pubs in London will show them to be highly segregated. Furthermore, while Bangladeshi Asians may not be drinking alcohol so much, many will be working in curry restaurants that serve it to white customers.

Often white people go to pubs only to speak and drink with their work mates as though they haven’t already seen enough of these people during the day. Accordingly, they also have little faith that the pub will be a place where integration will take place. Data from the Citizenship Survey show that 17 per cent of white people think going to pubs and clubs together is a good way to encourage mixing. Understandably, faith in the integrative power of the pub is even less among Bangladeshis and Pakistanis at around 5 per cent.

When you start to think about alcohol and how it is drunk, you begin to realise just how difficult the question of integration is. We all want to see people come together and for friendships to bloom regardless of creed or colour. But when you have wildly different beliefs about alcohol as well as different social conventions and relationships built up around it, you start to realise just how restricted the space is for mixing to occur. The obvious implication of all this is that if we are to try and foster greater mixing, it needs to be acknowledged that there are some cultural barriers that will get in the way, that there is little we can do about them, and so mixing would have to involve finding ways to work around them.

Anyone fancy a coffee? Make mine Irish!

Six theses on Muslim integration (plus reply from David Goodhart)