Integration in Britain: The Good and Not So Good

Postwar immigration-related diversity has fundamentally re-shaped the content of public policy discussions in the UK. Fiercely contested debates over multiculturalism, discrimination, integration, trust and identity are now dominant features of European political discourse, demonstrating the powerful impact of ethnic diversification on the public policy agenda of ‘receiver’ societies such as the UK.

The integration of Britain’s ethnic minorities remains one of the most challenging and divisive areas of public policy. My recently submitted PhD thesis sought to break away from ideologically driven discussions on social integration and instead provide a balanced, evidence-led, analytical account of its positive and negative effects.

The thesis was a mixed-methods study, incorporating quantitative analysis reliant on 2010 EMBES data and complementary semi-structured interviews conducted over the course of 2018. Five main UK ethnic minority groups were under analysis: British Indians, Pakistanis, Bangladeshis, Black Caribbeans and Black Africans. The thesis explored the possibility that while social integration provides opportunities for positive cross-group contact that are beneficial for social trust, it can also potentially heighten exposure to discrimination and perceptions of unequal treatment. My PhD research delivered three key findings:

Addressing this asymmetry, my thesis found that a composite measure of social integration (encompassing co-ethnicity of friendship group, workplace, neighbourhood, place of worship and civic associations) was significantly associated with a higher likelihood of reporting discrimination. Looking at specific “domains” of social integration, this relationship especially applies to the workplace.

As Fig. 1 below shows, ethnic minority people who are part of more “ethnically mixed” workplaces (where only a few or none of their work colleagues belong to their own ethnic group) are more likely to report discrimination than those who are “occupationally segregated” and employed in more “ingroup”, co-ethnic, bonding places of work. Interestingly, BAME people who are unemployed/not in work (‘NIW’) are the least likely to report discrimination. Another interesting finding was that higher educational attainment was associated with a heightened probability of reported discrimination. 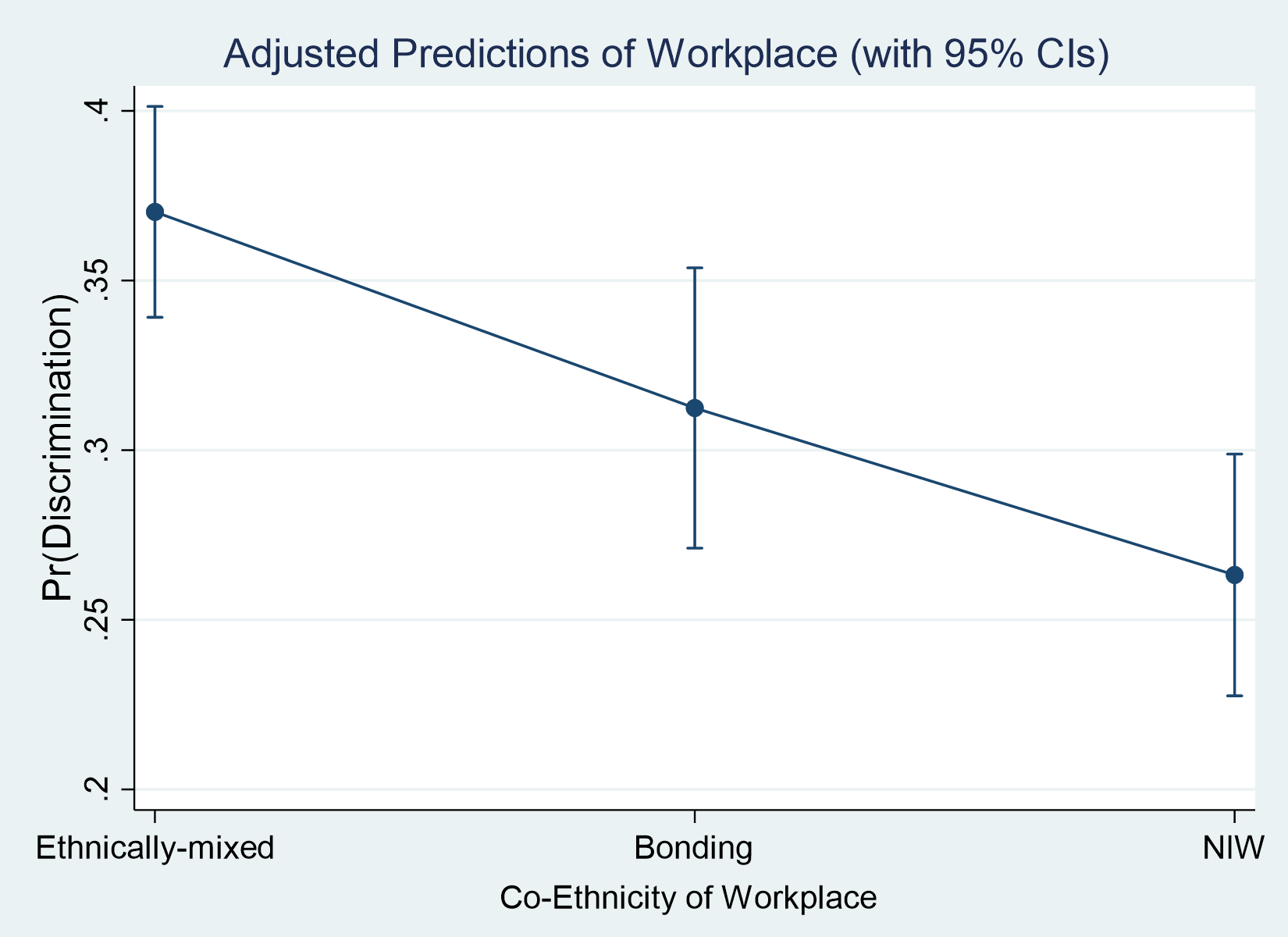 There was evidence that being part of more ethnically mixed networks could counterbalance the negative effects of discrimination on social trust. Although social integration can heighten exposure to discrimination, it is positively associated with social trust. While some degree of conflict is likely, this suggests that greater inter-ethnic contact can be positive for social trust on the whole.

This supports the general implications of contact theory. Despite being “insulated” from discriminatory behaviours and attitudes, socially and occupationally segregated people are less likely to be socially trusting, suggesting that limited opportunities for cross-ethnic contact can inhibit social trust among BAME people. This supports the findings of the government-commissioned 2001 Cantle and 2016 Casey reports – that meaningful cross-group contact can help to develop bonds of familiarity and mutual understanding which can be beneficial for social trust, while segregation is particularly harmful to community cohesion.

Fig. 2 provides an interesting contrast to Fig. 1. BAME people in ethnically mixed workplaces – who are most likely to report discrimination – are also most likely to be socially trusting. Those who are unemployed/NIW may be the least likely to report discrimination, but they are nevertheless the least likely to be socially trusting. This demonstrates that unemployment and associated forms of social exclusion are particularly damaging for social trust among BAME people. 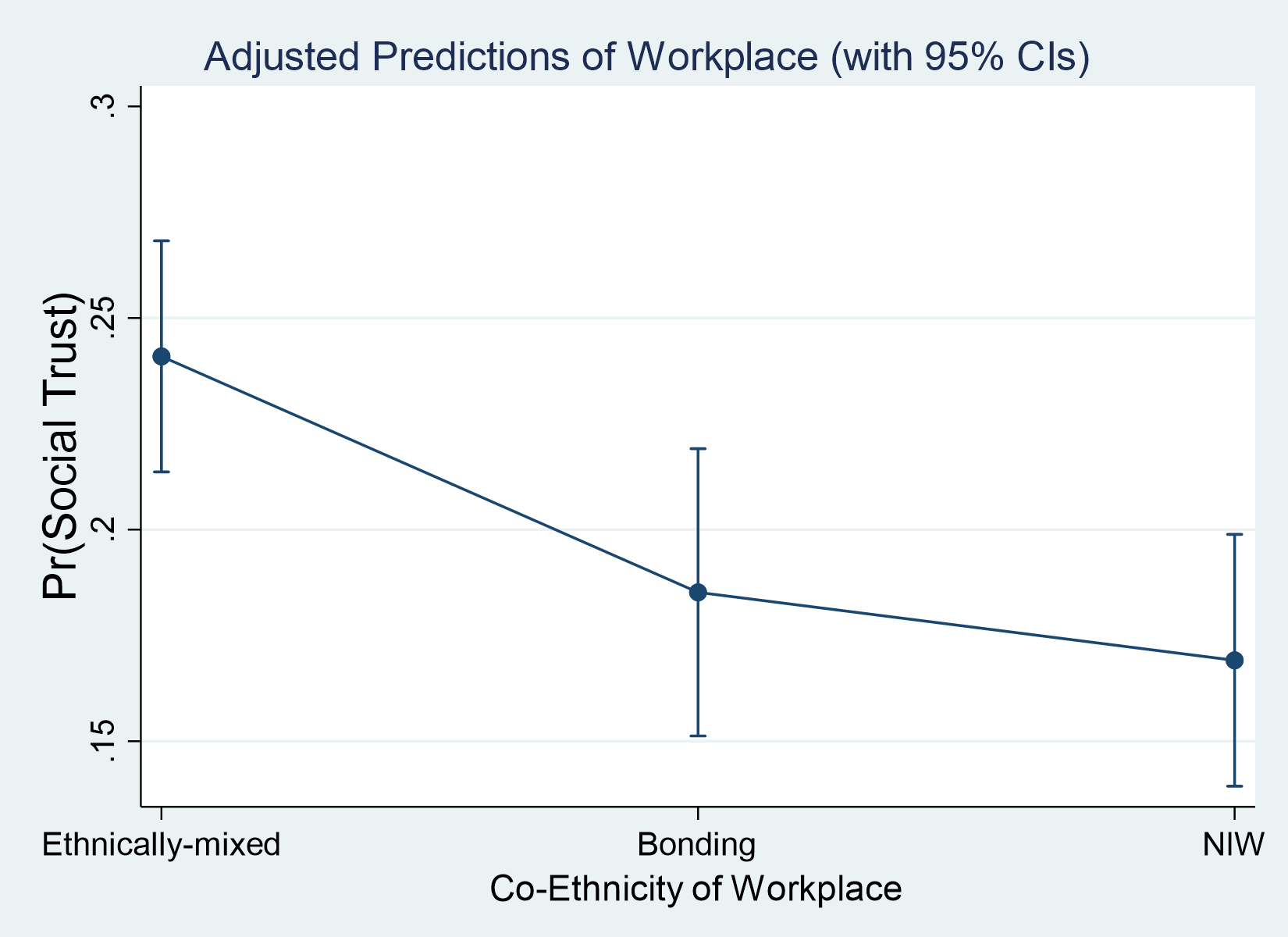 While quantitative analysis found that this could partly be down to heightened exposure to discrimination, that is by no means a full explanation. There is the possibility that socially integrated BAME people become absorbed into a social mainstream which is generally cynical and critical of conventional politics. Another plausible explanation is that as BAME people become more socially integrated, they are more likely to use members of the white British majority as a reference point when evaluating their own lives.

With a number of studies providing evidence of “ethnic penalties” in terms of job and salary grade, social integration may heighten perceptions of unfair treatment and inequality of opportunity. These two points could explain why BAME people who are part of more ethnically mixed friendship networks are less likely to report democratic satisfaction in Fig. 3. 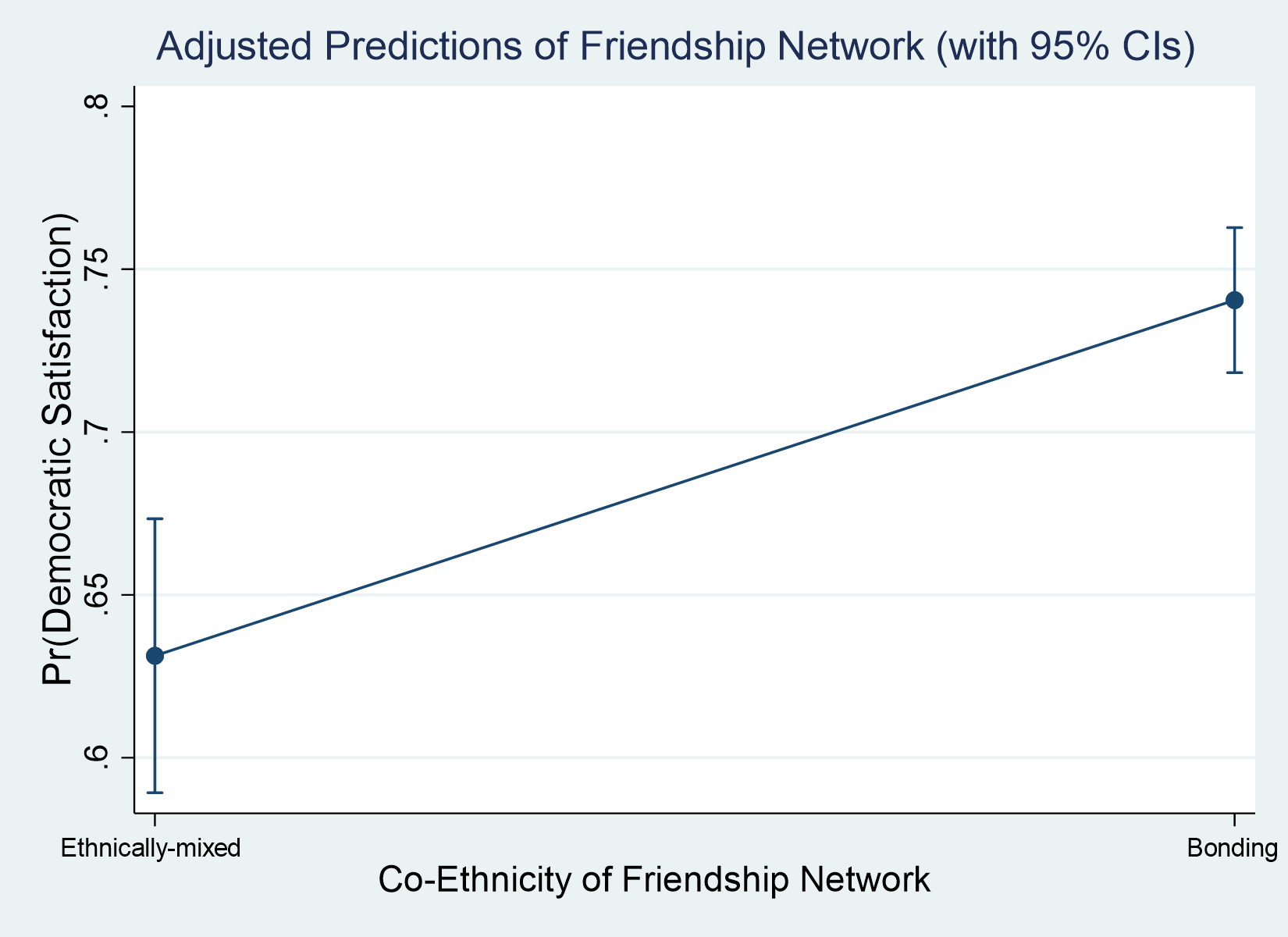 These findings collectively provide much food for thought. Social integration is beneficial for social trust among Britain’s ethnic minorities. However, social integration has its drawbacks, heightening exposure to discrimination and undermining satisfaction with the democratic system of governance. This suggests that as BAME people become more socially integrated, they could become more socially trusting but less democratically satisfied. In this sense, there are “two sides” to integration. The findings of my PhD research certainly pose a challenge for policymakers and practitioners who are interested to establishing a more socially cohesive and democratically satisfied multi-ethnic British society. 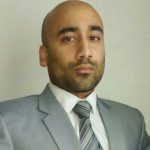 Dr Rakib Ehsan is a research fellow at the Henry Jackson Society. His PhD, titled Discrimination, Social Relations and Trust:...

The limits of social mixing