Are we headed to integration or segregation for England’s pupils?

Standing at the end of 2016, the divisions in society are inescapable. Differences in outcomes, attitudes and votes are clear, whether by class or education level, by gender or ethnicity, by latitude or urban setting.

What of the next generation? Is there more hope in the future? What levels of integration or segregation are today’s young people growing up in?

There is no doubt that schools in England are ethnically segregated. Some ethnic groups are dramatically over-represented in some schools relative to the population in their Local Authority. This has been known for a while (examples of our early work are here (2003) and here (2004)), and is uncontroversial. In some places, segregation is relatively low (for example, London) and in others considerably higher (for example, Oldham or Blackburn).

Some of the statistics from London secondary schools are quite startling in the levels of integration they show. For example, 65% of such schools have no majority group at all: no single ethnic group in these schools accounts for more than 50% of places. And in only 18% of schools does the largest ethnic group account for more than two-thirds of the pupils. By and large, and with exceptions, London’s secondary schools exemplify “integration”: a patchwork of pupils from many different ethnic groups, all generally doing very well.

Clearly, that is not a pattern seen everywhere in England, and in some places almost mono-ethnic schools co-exist in a multi-ethnic city.

Much more controversial is whether ethnic segregation in schools is rising or falling. Famously, in 2005, the then Chair of the Commission for Racial Equality argued that English schools were “sleepwalking into New Orleans-style racial segregation”, though we later showed that in fact segregation was not rising. Again in Spring this year, Labour MP Chuka Umunna claimed rising ethnic segregation, forming an all-party parliamentary Group on Social Inclusion. Recently, Ted Cantle has returned to this issue, with a rather pessimistic view, though focussing less on schools.

The tables below summarise the data for ten different ethnic groups. I provide results for the most common and widely quoted index of segregation, the dissimilarity index. I provide results for this in two forms, addressing two slightly different questions: the focus ethnic group relative to all other ethnic groups combined, and the focus ethnic group relative to only White British pupils. I also report on another widely quoted measure that is quite intuitive, though without the clear statistical properties that the dissimilarity index has. This is the “school majority” index: for example, the percentage of Black African pupils in a particular Local Authority who are in a school where the majority of pupils are Black African. More broadly, how many pupils are in schools in which their group is the majority?

There are two perspectives that are of interest. First, I give the weighted percentage of Local Authorities in which the measure fell between 2008 and 2013. Second, I also report on the relationship between the change and its prior level. This is because we are interested not only in whether on balance the indices are rising or falling, but also where it is rising. Specifically, if it is falling where high and only rising where low, that seems to a much more benign situation than if it is rising where high. The measure in the table here picks that up: a negative number shows a negative relationship between change and initial level (the more benign outcome). The more worrisome outcome in which the index is rising where already high is revealed by a positive number. The absolute size of the number is meaningful – the bigger it is the stronger that relationship is.

Finally, I have provided a subjective summary measure for each ethnicity for each measure, which I have labelled “Cause for concern?” This is a composite measure, equal to YES if the index is rising in more than half of LAs AND it is increasing where it is already high AND that relationship is statistically significant; otherwise it is equal to NO.

Table 1 reports these results for the dissimilarity index for each group relative to all other groups.

Table 1: Dissimilarity Index – named ethnicity relative to all other pupils

It shows that for all ethnic groups, segregation fell in far more places than it rose. This varies from it falling for 59% of White British students to falling for 75% of Pakistani students. Also for all groups, the changes take the benign form: falls where it was high, any rises where it was low. All in all, segregation is falling in more places than it is rising for all groups and the patterns are benign. The lowest fraction falling is for White British pupils at 59%. The dissimilarity index is technically “composition invariant” which means that it is not affected by simple changes in the underlying population mix. However, if a general increase in non-White British pupils is not evenly spread, as is almost certainly likely to be true, this overall result might largely reflect a broad increase in pupils from other ethnic groups. 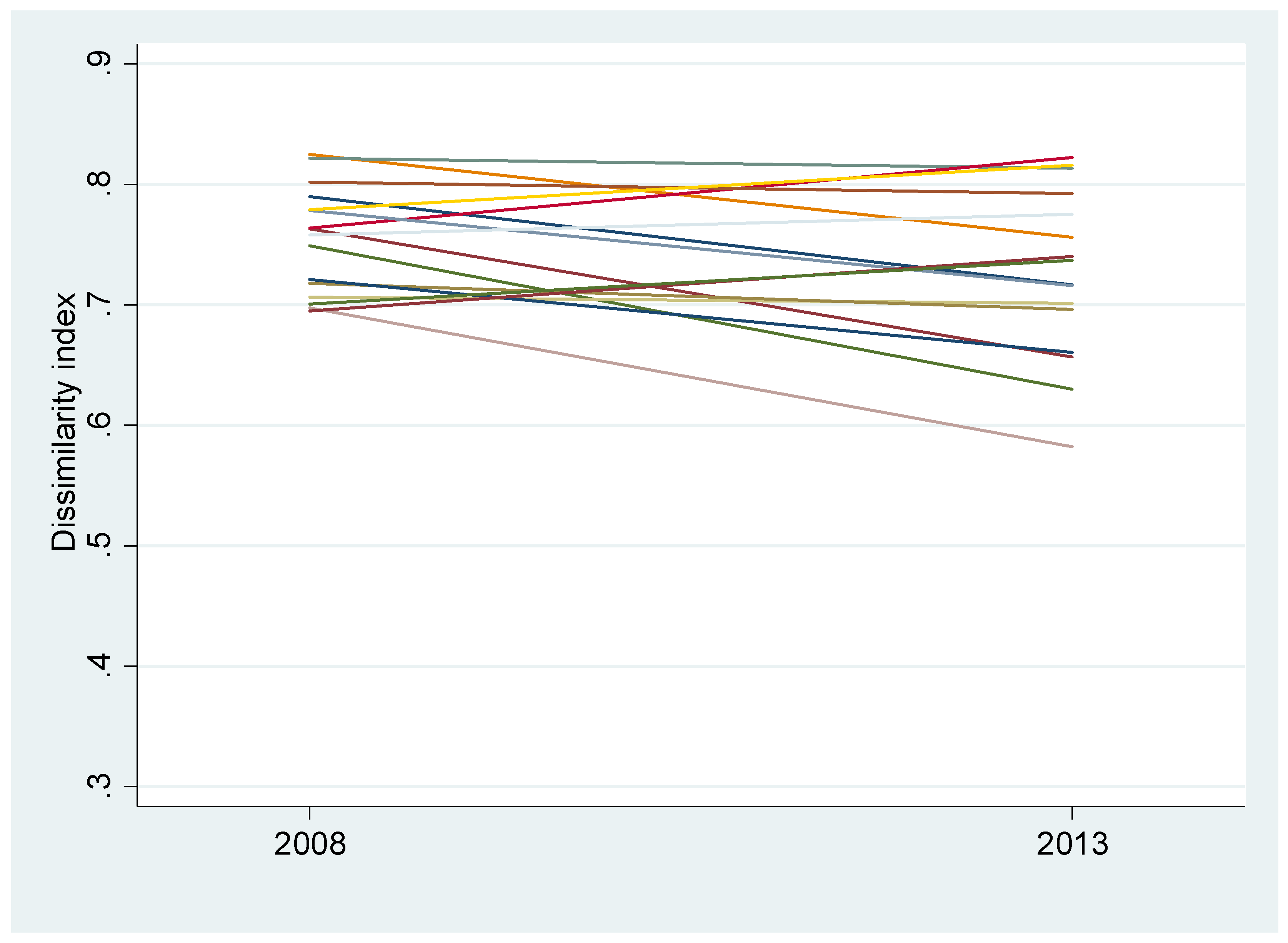 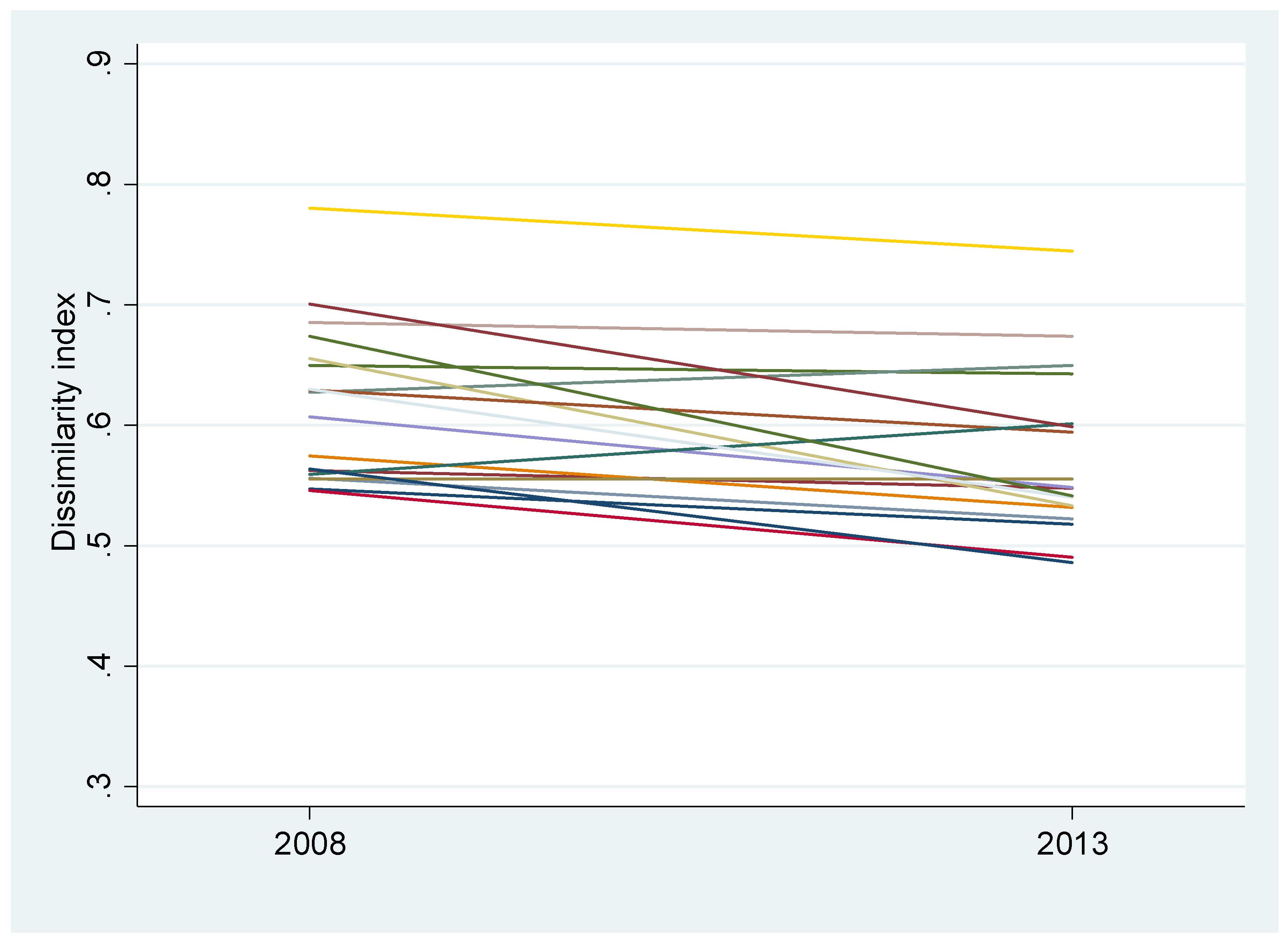 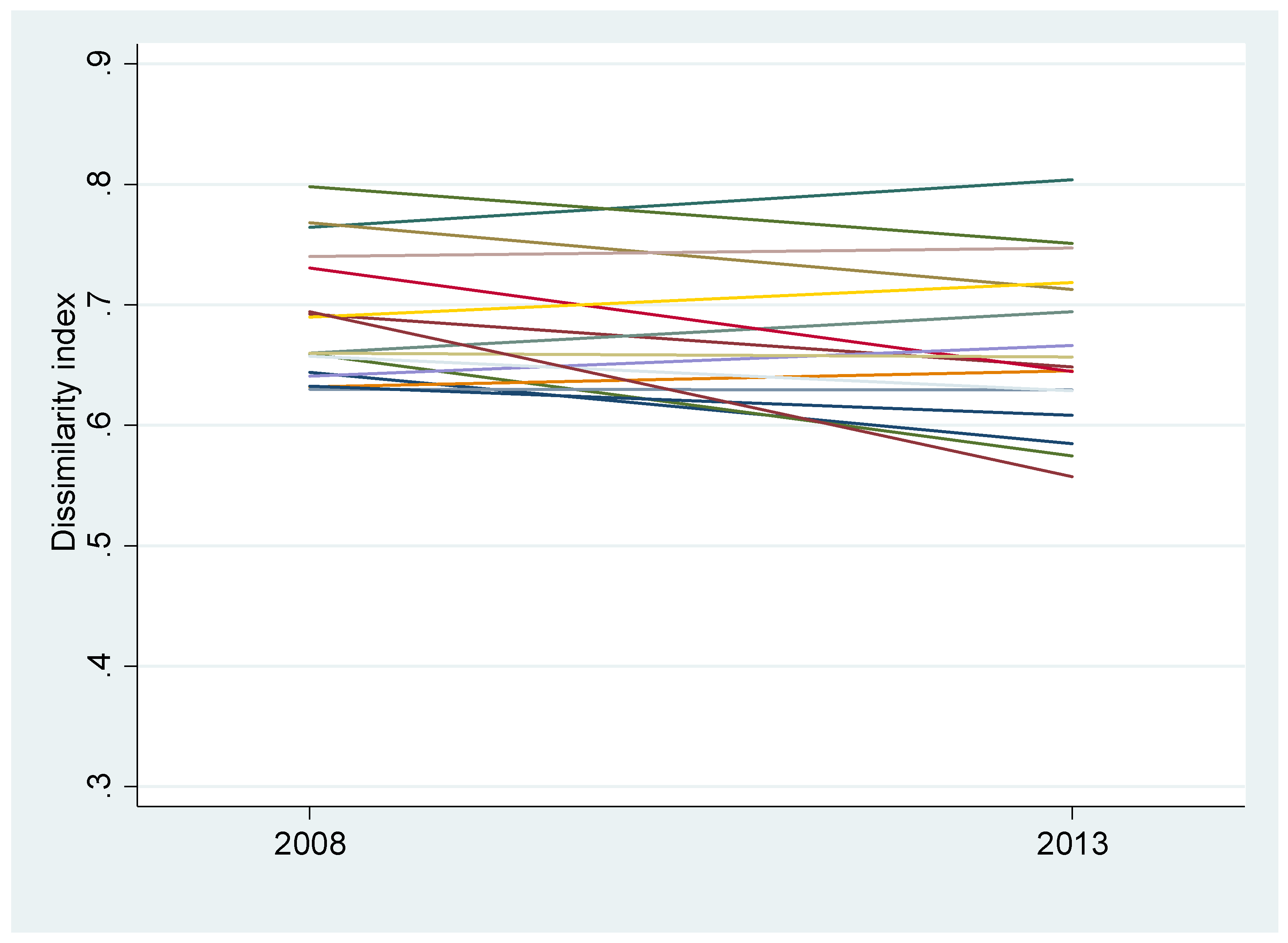 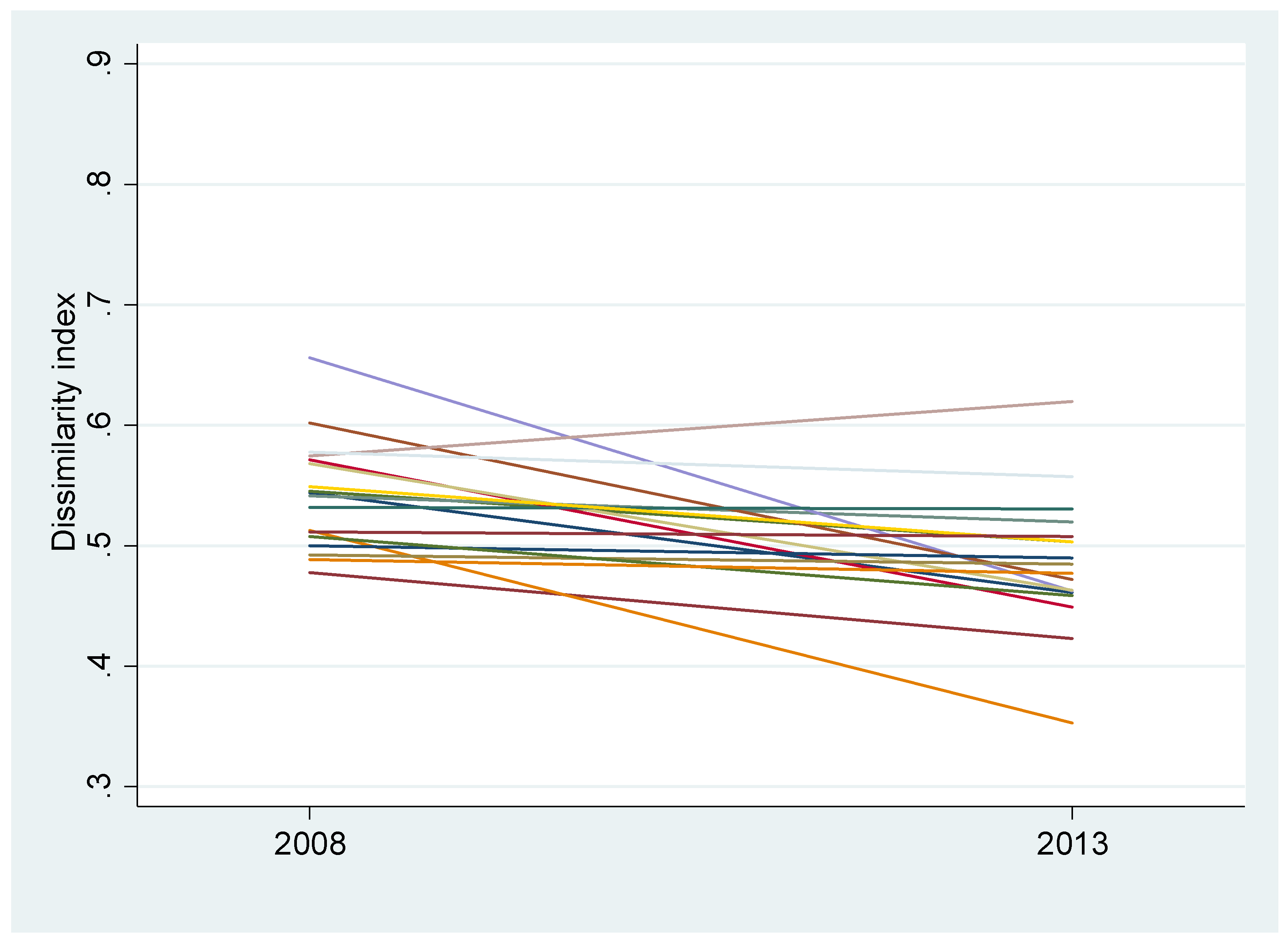 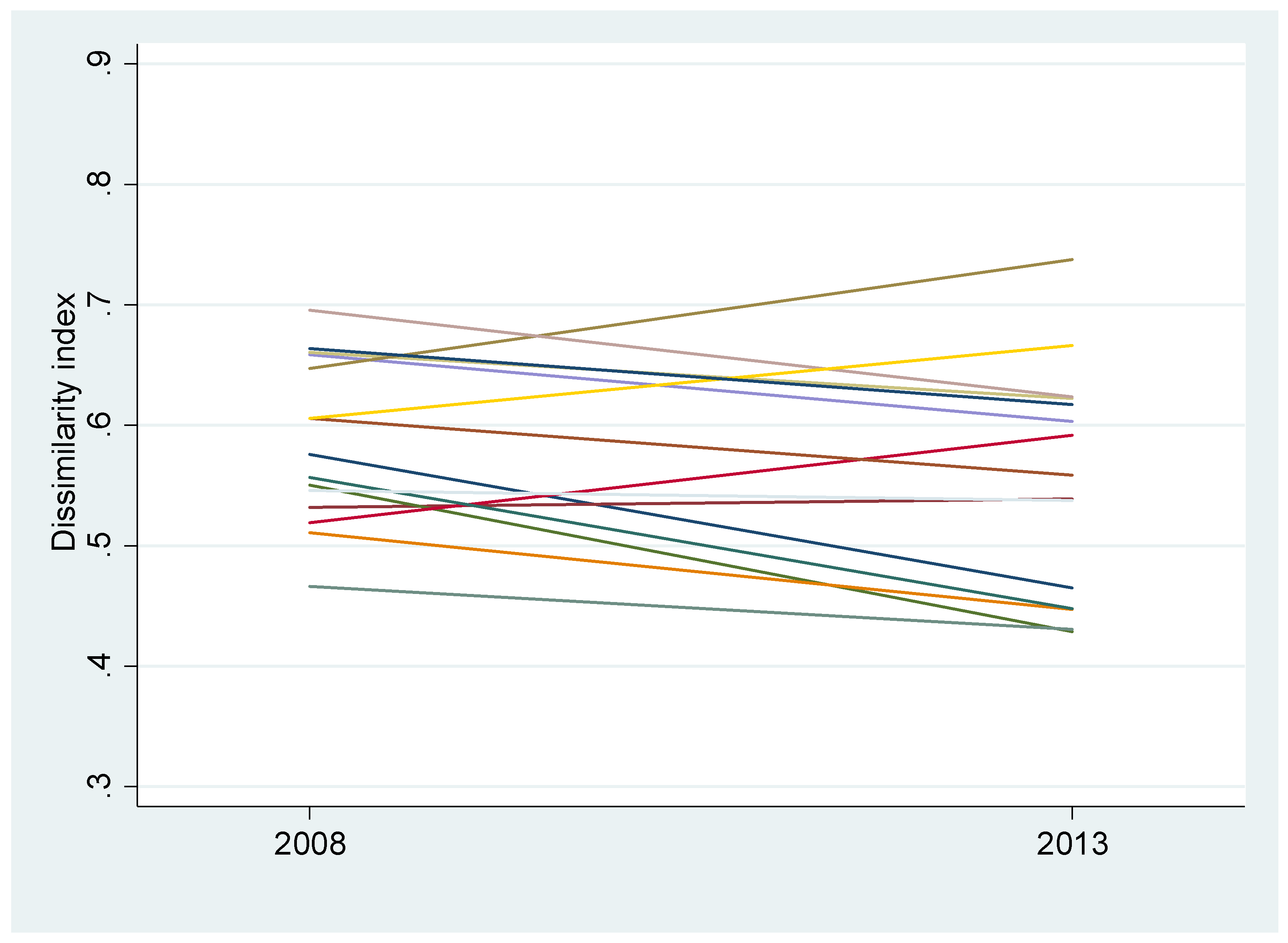 As we would expect from the results in the table, segregation is increasing in some LAs, decreasing in others, and given that this figure relates to the places with higher levels, there are more falls than rises.

Table 2 displays the results for the dissimilarity index for each group relative to just White British students. Again, for all ethnic groups bar one (Indian pupils), segregation fell in more places than it rose. Also again the nature of the changes is benign – falls where high and increases where low.

Finally, in Table 3, we see the fraction of pupils in own-majority schools has declined substantially, for example falling in 84% of LAs for White British pupils and 91% of LAs for Pakistani pupils. There are two LAs in which changes are positively related to prior levels, but this takes place in the context of the huge majority of LAs experiencing a decline.

Table 3: Percentage of pupils in schools where their ethnic group is in majority

So overall, I am happy to stick with my previous summary: “while there are places and groups where ethnic segregation in schools is increasing, the overall pattern is that it is falling or constant”. And, once again, this is definitely not to say there is no segregation, and it is not to say that the levels we have are unimportant. It is simply to say that, overall, it’s not going up.

Simon Burgess is Professor of Economics and was Director of the Centre for Market and Public Organisation at the University...